I recently had the privilege of having my piece for mixed voices, Let My Country Awake, performed in the final gala concert of the NZ Choral Federation’s biennial convention Choral Connect. The concert took place on Saturday 17th July at the Dorothy Winstone Theatre in Auckland, and was the closing event of the convention. Let My Country Awake opened the second half of the programme, performed by an Auckland contingent from Voices NZ Chamber Choir and conducted by Karen Grylls, followed by a new work by Celeste Oram.

I wrote the piece over December 2020/January 2021 as part of the Happy Composer Commission Project, an initiative by US-based composer Carlos Cordero. The text can be found in Indian poet Rabindranath Tagore’s collection of devotional poetry, Gitanjali. This collection was originally published in 1910 in Bengali, and was subsequently published in English in 1912 in Song Offerings – an anthology of Tagore’s own English translations of his work. The profound words of this prayer paint an evocative picture of an awakened nation, where knowledge, reason, truth, thought and action and freedom abound. 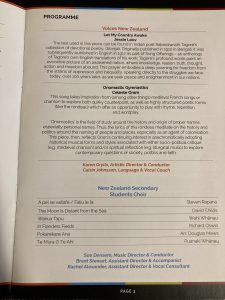 I was thrilled when I found out Let My Country Awake was going to be on the programme at Choral Connect. On the final day of the convention, participants attended a range of sessions focussing on composition including a spectacular class with Taonga Puoro composer and practitioner Horomona Horo. Then five choral works, including mine, were workshopped by Auckland members of Voices NZ over the course of three hours, with guidance from David Hamilton and conductor Karen Grylls. Like previous workshop experiences, this was a valuable learning opportunity and I appreciated the rare opportunity to work with David, Karen and the members of Voices NZ.

GITANJALI 35
Rabindranath Tagore (1861-1941)
Where the mind is without fear and the head is held high;
Where knowledge is free;
Where the world has not been broken up into fragments by narrow domestic walls; Where words come out from the depth of truth;
Where tireless striving stretches its arms towards perfection;
Where the clear stream of reason has not lost its way into the dreary desert sand of dead habit;
Where the mind is led forward by thee into ever-widening thought and action
Into that heaven of freedom, my Father, let my country awake.