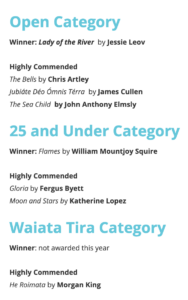 I’m thrilled to share that my work lady of the river has been selected as the winner of the Open Category of the 2022 Compose Aotearoa! National Competition for choral composition. The contest is run by the Choirs Aoteaora New Zealand Trust which manages our three national choirs – Voices NZ, NZ Youth Choir, and NZ Secondary Schools Choir.

lady of the river was composed in 2020 for the University of Auckland Student Choir, for mixed choir, string orchestra and piano, but thanks to Covid it didn’t end up being performed. Before submitting it for this competition last year I did a massive revamp, rearranging it for mixed choir, piano, cello and violin, amongst many other revisions! I was really happy with how it turned out and it means a lot that it also stood out to the judges.

I feel hugely honoured to have been recognised alongside some brilliant names in the NZ choral music scene. This was my third time entering a work into the contest and I’m really proud of all the work I’ve put in which has led to this success. We’re pretty fortunate to have this platform for new choral music available to us here in Aotearoa and I’m looking forward to hearing more of the new works it has inspired.

Congratulations to everyone who entered. It can be challenging to put your work out there but but eventually hard work and perseverance does pay off! 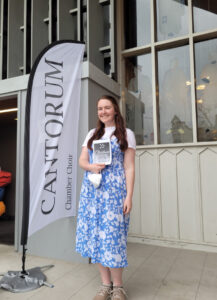 A year after it was first scheduled to be performed, I had the pleasure of attending the premiere of my a cappella piece Snow Song, performed by Auckland-based chamber choir Cantorum. I was commissioned to write the piece in 2021 for their Christmas concert but like many events last year, Covid got in the way. It was wonderful to hear my work performed alongside a delightful and diverse selection of Christmas repertoire. The audience response was lovely as well, a few people approached me with some kind words which were very much appreciated. Another milestone in my journey which I’m grateful for and I’m looking forward to the next opportunity. 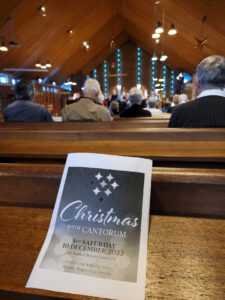 Here is a look at the programme note written by Cantorum director Anita Banbury:

Focussing on ‘Hodie’ and ‘Pipes’ we present, among other Christmas pieces, the first performance of Snow Song. Most years we commission a university student to write a piece for our Christmas concert. Jessie Leov wrote her setting of Frank Dempster Sherman’s poem in a pastoral manner that has charmed the choir.

Over August and September I had the pleasure of taking part in a songwriting initiative run by a local organisation called Women About Sound. I travelled out to Parachute Studios every fortnight for three sessions together with another participant and a mentor, with each of us developing a new song in a supportive, collaborative environment.

To end the project we spent some time in the studio putting together a demo track for our songs. I drove out to Devonport to Depot Sound and had the brilliant Jess Haugh of Women About Sound as engineer for the session. My dear friend and fellow musician Avalon came in to play guitar for me and did a brilliant job. It’s been really motivating being part of this project because I’ve been wanting to get back into the world of songwriting for a while. I have big plans for 2023 so watch this space! 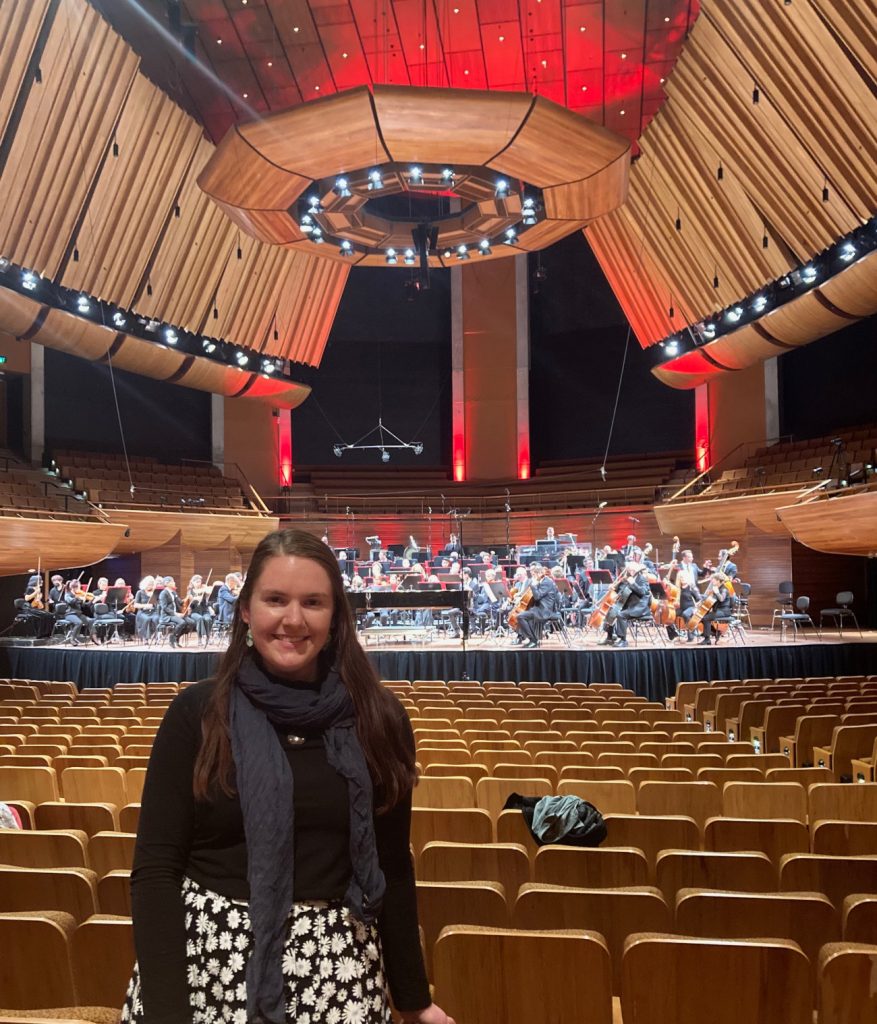 I recently got back from a successful trip to Wellington to attend the 2022 NZ Composer Sessions where nine orchestral works by Kiwi composers were recorded by the NZSO. This is an annual project run by the SOUNZ Centre for New Zealand Music, NZSO and RNZ Concert. There were five rehearsal sessions over three days, leading up to the concert on Friday evening where all nine works were filmed and recorded in front of an audience of invited guests, conducted by Benjamin Northey. My work marble, bark, silver was inspired by a series of poems by a Kiwi poet now based in Australia, Deborah Norrie-Jones (I’ll put the poems at the bottom of this post). I contacted her when I first found her poems to ask permission to use the text in the title of the piece and it’s three movements, and we had kept in touch since then. I was honoured that she travelled over to attend the concert and hear the work and it was lovely to meet her! My Mum also came over from Nelson for the event and it was great to share the experience with her. 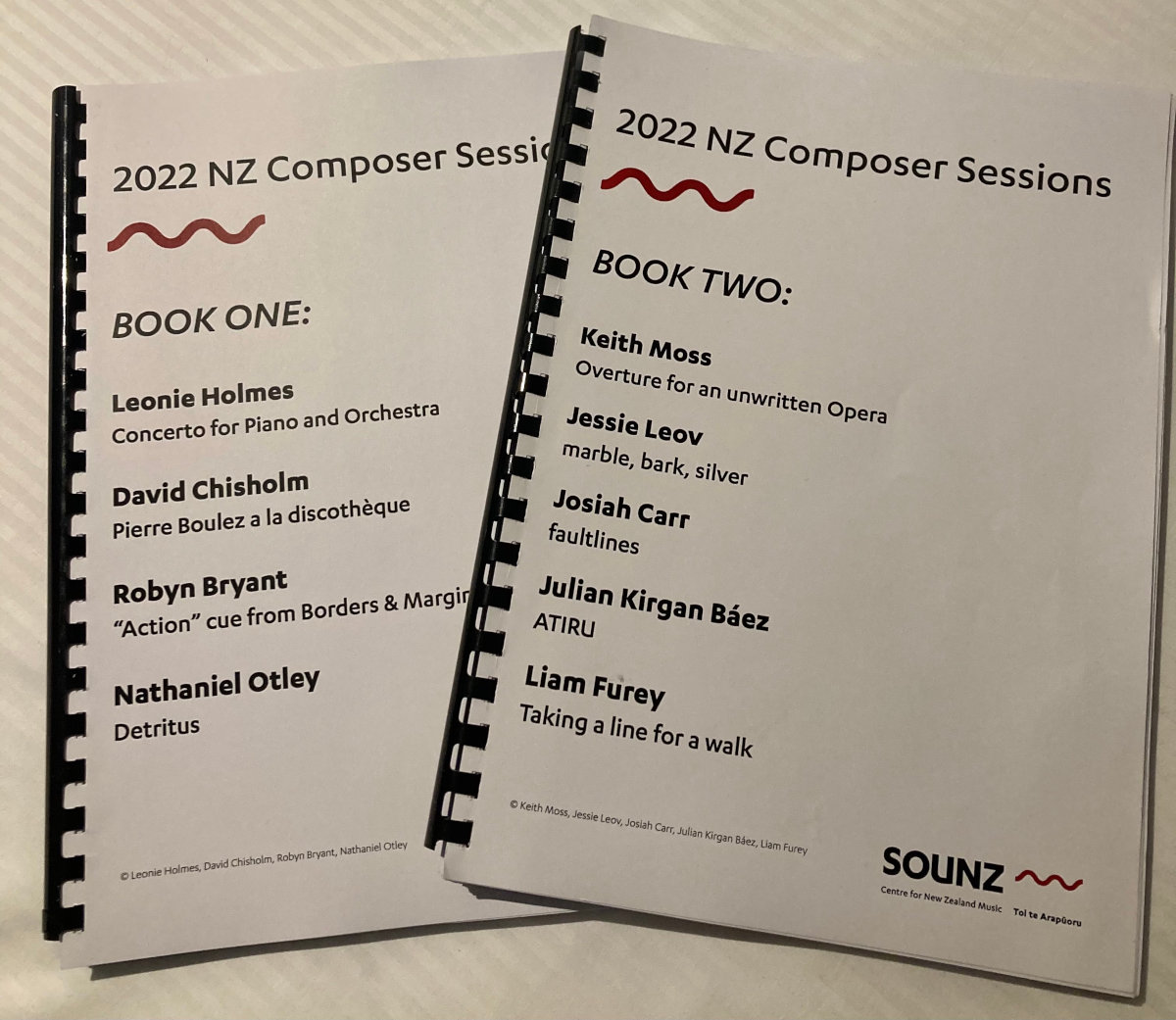 I had my first experience with the NZSO in 2018 when they recorded my piece the wilds as part of the NZSO Todd Corporation Young Composer Awards. It was special to be able to have a similar experience four years later after growing so much as a composer and musician. I found it really valuable watching the other eight works in rehearsal, seeing how the composers interacted with the conductor and orchestra to bring their visions to life throughout the rehearsal process. There was so much diversity across the nine selected works which made for a really interesting (and entertaining) listening experience. Feeling so grateful to have been involved with this project – definitely a career milestone! Massive thank you to SOUNZ, NZSO and RNZ Concert for coming together to provide this invaluable opportunity for NZ composers each year.

The video will be released sometime next year so I look forward to being able to share it with you.

It is a fine arrow

shooting from a glass turret.

It will slice through you

You will cry out but

no mercy. You will flail,

and those around you

shrink back, but you will return,

caught between your ribs,

It is a soft emerald cloth

that will bind you.

It is not fallen, it is shredded.

It is scratched red and fine

on the edges of tomorrow.

It will bleed, though

you place soft fabric on it,

to hold, to stay the flow.

Eventually, you will let it run

freely. The ground beneath you will be red.

it will pursue you through

the valleys of the world.

Eventually, you must cup

your hands and drink.

It is the smile

of a sun god

You will need to slip

quietly past and search for

They will be hidden

along the road. One tucked

in a child’s bodice edged

with embroidery and animals.

Another you will find as

you stand defiant at the door

of a home where a dog

There will be more.

You may need to scratch

and listen to which 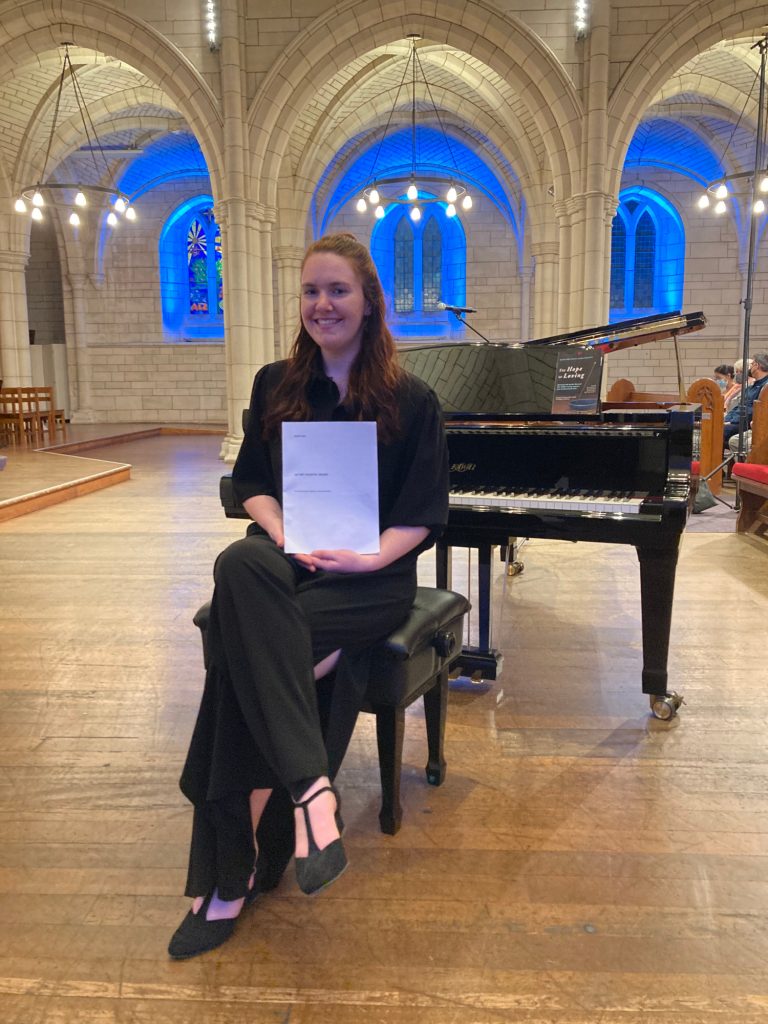 Pleased to share that there was a packed audience at Auckland Youth Choir’s recent concert at St-Matthew-in-the-City.

My piece Let My Country Awake opened the programme. I was asked to do a short intro before the performance which was definitely a step out of the comfort zone for this introverted composer but a challenge is always good! It was a new experience for me to sing my own work and I hope I get the chance to do it again sometime.

I’m thrilled that AYC chose to perform my work and it was lovely to sing three other new works by young Kiwi composers who are also in the choir.

Looking forward to my next musical outing later this month in Wellington with the NZSO. 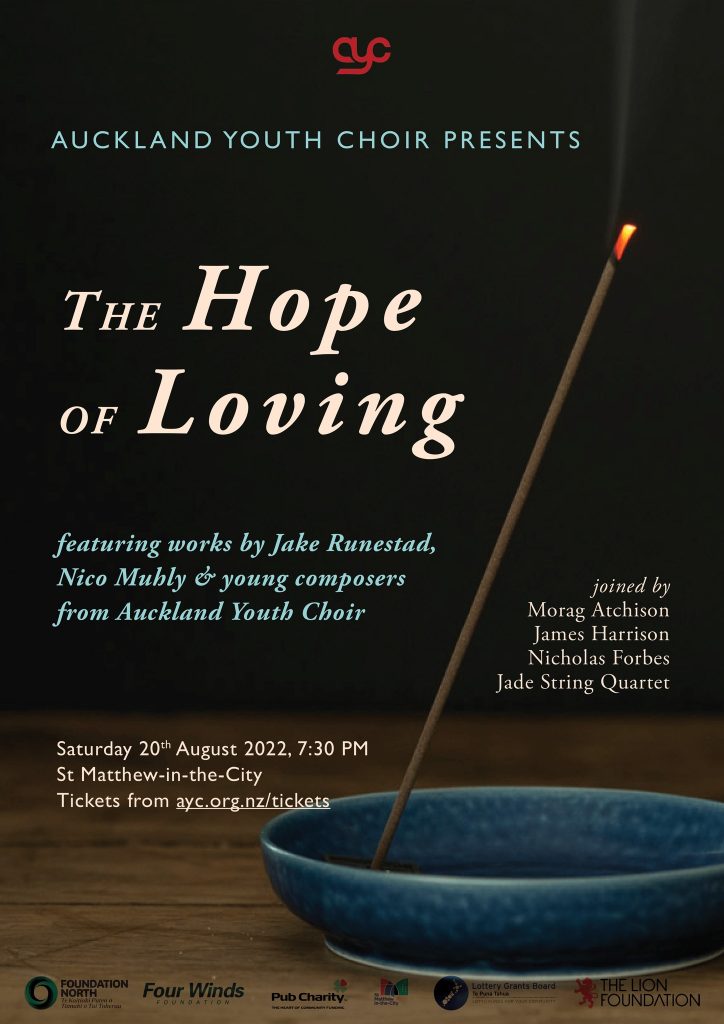