As a Sweet Adelines member you can be a member of more than one chorus and at the current time I am a member of:

Let’s just say I kind of like singing barbershop and being involved in this organisation…… just a little bit!

Christchurch City Chorus  has been preparing to travel to Las Vegas to represent NZ at the international Sweet Adelines Competition and compete against around 30 odd choruses from around the world (after winning the NZ national competition in 2015).

As an OOTM, I attended coaching weekends on average once a month from January to August (sneakily flew to Canada at the end of August) and then reunited with the ladies in Vegas on October 13th for the contest.

My delightful Mama is also a member so I got to spend the 10 days in Vegas with her! Who could possibly wish for more!

This was my second time at the annual international competition after competing with Greater Auckland Chorus in October of last year (see blog post here).

It was a CRAZY 10 days. Most of us arrived on Thursday 13th and we then spent the next 6 days rehearsing for 5-6 hours a day. It was exhausting but exhilarating! We had our favourite coaches coming in to work with us – Darlene Rogers, Lynne Smith and Lea Beverly, along with short appearances from Ryan Heller, Jim + Renee and other celebrities!

We had a joint show on the Tuesday night with Rönninge Chorus 0our directors have been good friends for many years and this joint concert has become a tradition. We performed our semi-finals and finals packages which was a great test run. It was a real pleasure and, of course, we were all blown away by Rönninge.

Long story short, semifinals day came along, we hit the stage in our green dresses (pictured below – spot me and my mother behind me to the left) and after a NERVE WRACKING announcement of the ten finalists, we were announced as contest #10 in the finals! Oh the agony of having to sit through the announcement of the nine other finalists and not knowing if ours would come next…. I don’t know if I have ever been in such a nervous state IN.MY.LIFE. 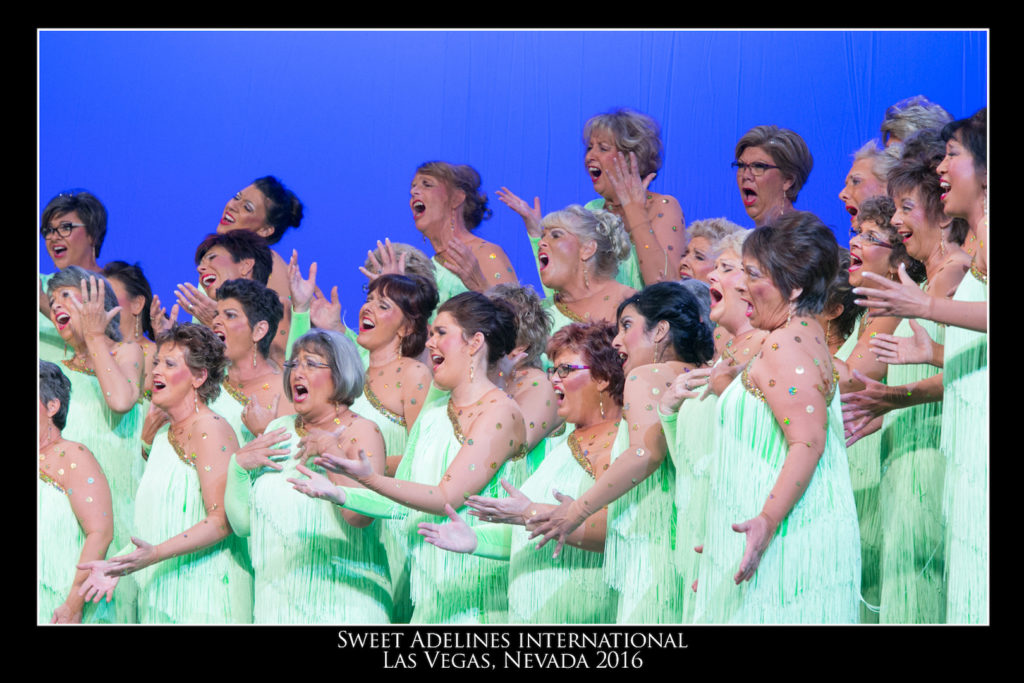 Friday was spent rehearsing for the finals and Saturday was another early morning to do our make-up, have breakfast, get our hair styled, warm-up, rehearse and get back on the stage! We were so pumped to get out there and perform the package that we’d been preparing for so long. And we nailed it. The reaction from the crowd was amazing. It was over so quickly and we couldn’t be any prouder of how it went.

Another long story short, we received 5TH PLACE and the MOST ENTERTAINING CHORUS AWARD! Our director Virge put an unspeakable amount of time and effort into conceptualising the finals package and bringing it to life, it was honestly her baby, so it was such a treat for her to be able to go up and receive that award. We were super happy! It was the end of a magical time spent with the amazing ladies of CCC.

I look forward to the next time I have the opportunity to learn, grow, sing and perform with this wonderful group of women. But for the next 6 months I will be singing with the Lions Gate Chorus in Vancouver – I’m so ready to learn from them! xx

**ADVICE for future competitors who will compete at the MGM Grand – the air is VERY DRY. There is air conditioning everywhere (and cigarette smoke near the casinos). We were advised to leave the air conditioning on in our rooms while we were away and turn it off when we get back, and keep it off at night. I went as far as to bring a humidifier with me to leave on 24/7 in our room. Sickness spread through our chorus far and wide unfortunately, I managed to avoid it myself ONLY JUST – by non-stop hydrating, taking multitudes of vitamins, washing my hands a lot, trying to still eat fruit and vegetables over the 10 days, and just generally looking after myself very carefully. Unfortunately a number of our chorus were struck down with a terrible flu. Some disturbingly effective steroids of some kind allowed them to still get on stage with us. Most important thing: look after yourself and keep those vocal cords MOIST!

My final exam of the year is over and I will soon be heading back to Nelson for the summer! Very excited about it! Feels like a lifetime since I’ve been home even though it’s only been nine weeks. I’ve worked extra hard this semester, especially since I had time off from uni when I travelled to America, and I’m hoping the work will pay off when I get my final grades back.

Just in case you’re wondering – I do have two more years of university before I’m finished!

I’ll graduate in 2018 with a Bachelor of Music majoring in Composition and a Bachelor of Arts majoring in French. My current plans involve spending one of my remaining two years studying on exchange in Canada, but more about that at a later date ;) In Nelson I’m looking forward to spending time with my family, doing some gigs and going on some more hiking trips and getting back to this amazing scenery. Although the snow may be gone by now! Photo credit: LifeformLabs. 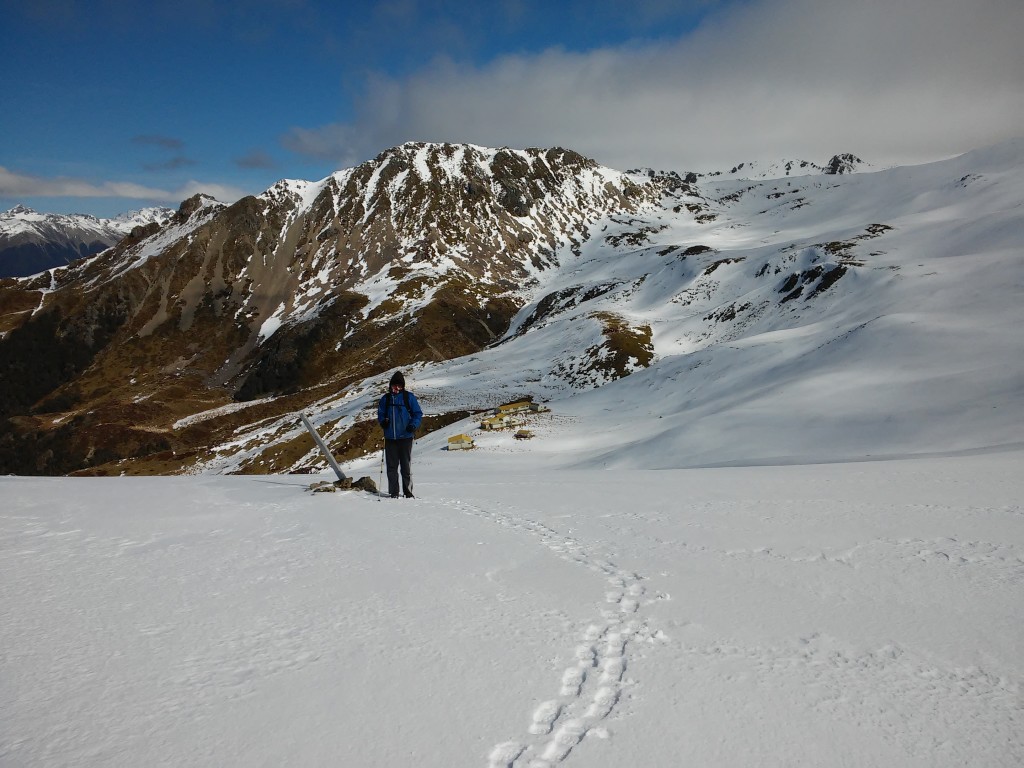 It’s been about a month since I returned from my trip to Las Vegas where I competed with Greater Auckland Chorus at the Sweet Adelines International Convention! The chorus achieved a score improved by 120 points since they last competed internationally and improved their world ranking by one place so overall it was a very successful experience.

I spent 9 days there and witnessed some truly incredible performances – the highlights being the days of the quartet and chorus finals. I did have a bad case of the flu for the majority of the trip unfortunately so I was holed up in the hotel most of the time! I didn’t let it ruin the trip though and I’m so stoked I got to go and have my first international convention experience with Greater Auckland Chorus this year. Bring on the next one!! In the meantime check out the little gallery below with some great shots which captured the fun memories of us having a blast on stage! Thanks to Read Photography.

A massive thanks again to everyone who helped me get to America! Your contributions are the reason I was able to make it over there and I am so grateful for that! The ladies of Nelson Bays Harmony Chorus in particular were a big help in getting me to Vegas – and of course my Mum, who is my biggest supporter, was the mastermind behind the major fundraising event we held. Mums are the best!

My most recent barbershop experience was doing a gig earlier this month with Molto! Quartet – the 2015 Sweet Adelines NZ champion quartet who also competed in Vegas! I was their replacement tenor as theirs is currently overseas. It was a great performance opportunity for me and good experience singing with different voices in a quartet! My own quartet ZEAL Quartet is competing for the first time at the NZ National Convention in 2016 in Wellington in May and also at the Under-25 Rising Star Quartet Contest in July in Auckland! Very exciting times – lots of hard work ahead!

I know I say this every time but I will endeavour to actually do a blog post at least once a month from now on. So much stuff is going on in my life and it’s quite nice to be able to write it all down and fully appreciate the awesome things I get to be a part of! I’m going to make the most of this summer to be productive and get some exciting projects underway. More updates to come :)